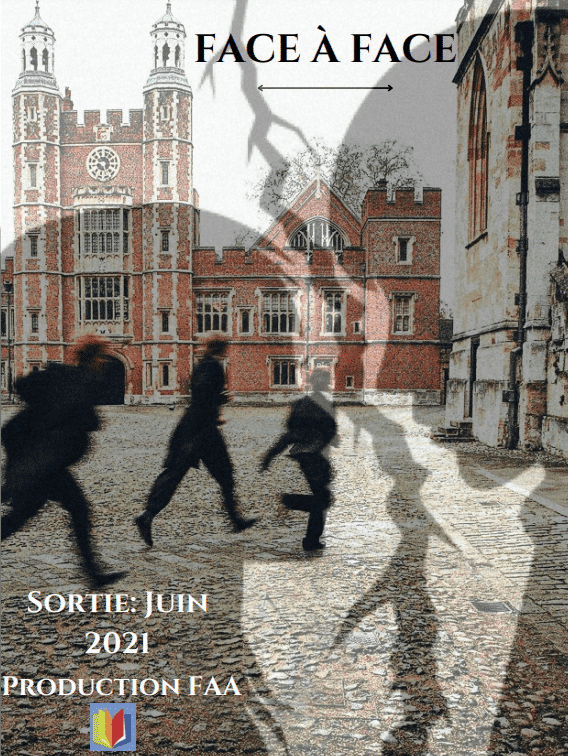 Middle School students have worked on “Face à Face”, a Musical Movie Production, for 10 months! An incredible, interdisciplinary project factoring in creativity, team spirit and thoroughness. This creation that came to life on June 10 with the Movie Premiere broadcasted to Middle School Parents.

“On the first day of school, Mme. Venturelli came to us with the idea of filming a musical. We were so excited but had no idea where to start. Mme. Venturelli showed us scenes from different famous musicals like Grease, Singing in the Rain, and West Side Story. ”

“We came up with a plot for the musical, although initially, it wasn’t the best. With Mme Venturelli’s help, we perfected the storyline and the character list.

We sent letters to celebrities to ask for acting advice. Somehow we were lucky enough to hear back from one French Comedian, Sellig. We had a zoom meeting with him, and he gave us tips and tricks on performing.”

“In science class, we had a unit on how a camera, microphone, and green screen work. In Digital Music, we created songs that you will hear in the movie.
In art class, we prepared masks for the ball at the end of the musical and discussed costumes.

We learned how to raise funds, and thanks to Madelaine, Chocopain, the PTO and the  Hoffman family, we were able to purchase additional material and decoration. ”

“Sometimes, unexpected problems occurred during preparations like decorations missing, or balloon problems. There were also issues with the filming process: people wearing green in front of the green screen, weird background noises like birds, radios, cars, a drone nearly falling on a student’s head, and clumsy people breaking materials.
Filming was more difficult than we expected, but in the end, we made it work! ”

More Pictures From the Movie